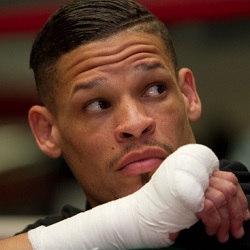 It was a WIN this past Friday night for first openly gay boxer, Orlando Cruz.  Cruz told his secret to the world in a 2012 interview with Real Sports. The clip is below.

On Friday night, Cruz knocked out Alejandro “Alex” Valdez in the seventh round at the Kissimme Civic Center just outside of Orlando.  Cruz’s record?  24-4.  12 Knockouts.

The evening of events was dedicated to the victims of the Pulse night club shooting, and many family members were in attendance.  A 49 bell salute rang out for the 49 lives lost. That can be seen HERE at about the 3:20 mark.

Want More of Orlando Cruz? Here’s an interview from a few years back where he discusses his decision to come out as a gay man.

According the The Washington Blade, Cruz married his boyfriend, Jose Manuel Colon in a 2013 ceremony in New York’s Central Park.