WHY and HOW can someone be so cruel?

Man Pours Scalding Water On Gay Couple As They Slept  Anthony Gooden and his boyfriend Marquez Tolbert were inhumanely attacked in an Atlanta home as they slept. The boyfriend of Gooden’s mother, Martin Blackwell, reportedly had a problem with two men asleep together in the same bed.  He poured boiling hot water onto them as they slept, resulting in second and third degree burns.

Martin Blackwell has been charged with aggravated assault, and in my opinion should be charged with a hate crime.  It is what it is…

The attack happened in February, but the two victims are now speaking out.

Gooden and Tolbert will have to undergo years of treatment and endure a lifetime of scars.

A fundraiser was created for the couple by a friend of the Tolbert family.

The family needs immediate help with medical bills, and the everyday expenses of recovery such as prescription drugs and dressings for the burns.  I and the family will be so grateful for any donation your heart compels you to give.

All donated funds will be used for medical bills, prescriptions, supplies, and everyday expenses such as rent and utilities.  Marquez assisted his mother with home expenses. He had just started a new job, so he doesn’t have work benefits. –an excerpt from their gofundme page

You can donate to the couple’s Burn Recovery Fund at Go Fund Me .  At last check, over $53,000 has been raised.  That’s over their Forty Thousand Dollar goal, but is still quite modest considering the physical and emotional damage caused by this attack.  Still show your support if you can. 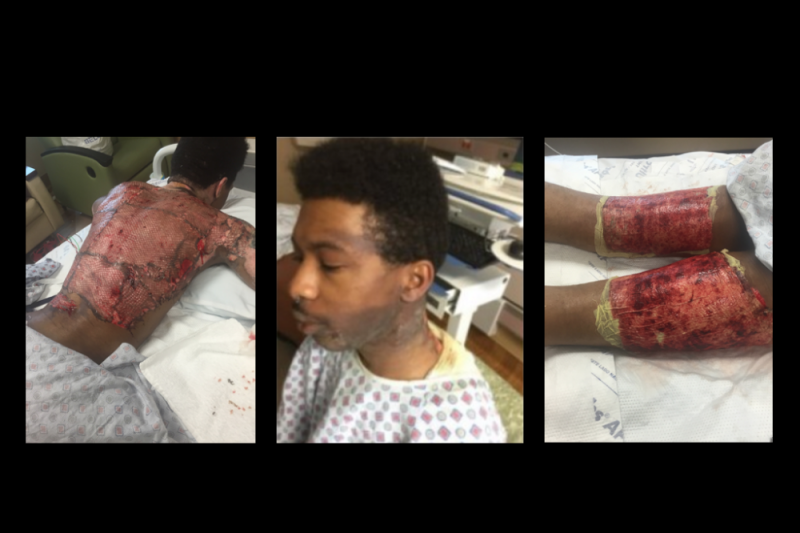 Photos of the injuries linked from their gofundme page.