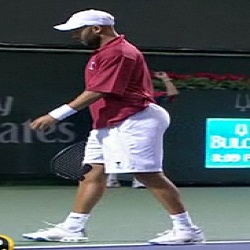 Tennis star, James Blake was mistakenly arrested last week, and is now speaking out about the incident.  As seen in the video below, he was quickly approached by a plain clothed officer, tackled, and thrown to the ground.

After realizing they’d arrested the wrong person, he was released.  But not without a few bruises.  It appears the officer used excessive force, but an investigation is ongoing.

Why are we reporting news on James Blake?  Well…we like to keep track of a Phatty like that…

More on the story:  Blake’s Interview with ABC